This must be most challenging cake in my baking career.

But me being me, I like being thrown a challenge as it gets me
really excited and jittery, all at the same time.

Kind of wonderful, that feeling! 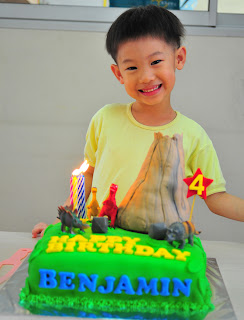 Actually so do I! I don't always share this info, as I do not want to be seen as a nerdy mom.
I learnt all the dinosaurs names from my boys, and they are quite a mouthful! *laughs* 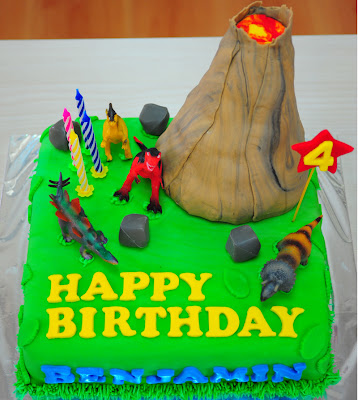 This cake, which is the 2nd that Elizabeth ordered, will be dinosaur themed. Placing dinosaur models on the cake would be a good way to decorate the cake, this was the request from the birthday boy. Here is the twist - throw in a VOLCANO!

I have never made a 3D structure for my cakes. At least in the last one and a half years since Dec 2011, that I have been baking and decorated cakes and cupcakes. I have seen how the Cake Boss would mould shapes out of rice crispies. The process looked fun and interesting, so I decided that I should give it a go. I was very frank with Elizabeth, that this would be my first time working with rice crispies and I wasn't totally sure that I would succeed.

Being very understanding, she said it was no problem if I failed.

The first volcano I moulded was a success! *YAY* I sent a picture of it to my sister. She said it was too small, will need to double up. Oops! I worked on preparing more rice crispies to increase the size of the volcano. I heard that Benjamin was really looking forward to seeing the volcano, so I couldn't fail or make one that wasn't convincing. 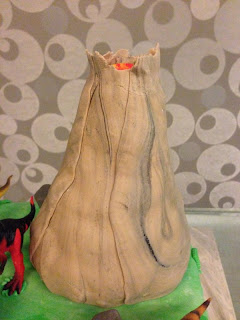 The volcano did take a hours to mould and I had to let it harden. Did I mention that I love volcanoes too? Yes, deep down I am the true blue Geographer, volcanoes & lava make me very excited. LOL!

Typically volcanoes should be grey or dark in colour, which wouldn't look very nice on a cake. I also like to mix colours in my fondant and create a marbling effect, so I opted to cover the volcano in brown fondant with streaks of black and grey. Next was the lava on the top. I mixed 2 balls of orange and bright yellow fondant, twisted and kneaded them to look like lava. I was pleased with the results! 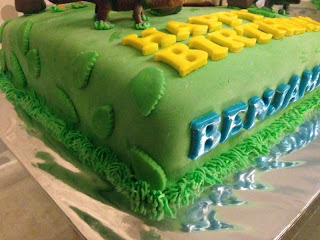 The cake is a single tier vanilla with reduced sugar strawberry jam, covered with green fondant. The base is lined with icing grass and the sides were decorated with fondant leaves.


Elizabeth brought the Dinosaur & Volcano cake
to Benjamin's 4th birthday party at school.
I heard that he was totally thrilled with the volcano,
and his friends were in awe. Lovely!

Sincere thanks for Elizabeth for trusting me, for being a totally cool customer, and also for mentioning me in her blog ;)

Posted by Christina at 12:33 AM No comments: 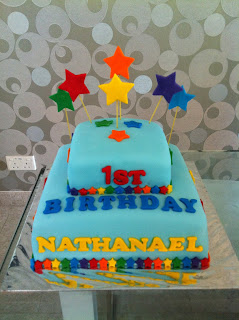 When Elizabeth first contacted me, I was surprised. She heard about me and my cakes, through her friends who ordered from me before. Not having tasted my bakes, she went ahead and ordered not 1, but 2 big birthday cakes for her 2 boys.


Truth be told, I was apprehensive. Elizabeth wanted hummingbird cake but I didn't know how to make it. I felt bad. At the end, she said chocolate and vanilla in separate tiers were just fine. I am so fortunate to always meet lovely customers.

We discussed in detail and finally nailed down the design for the 1st birthday cake. 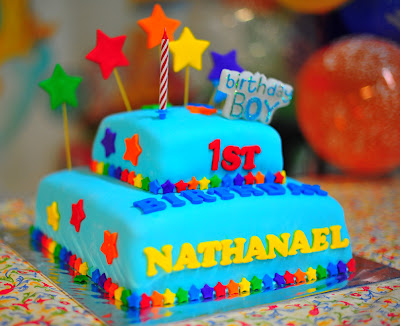 The first cake was for Nathanael. He likes bright colours and stars, hence the use of all the colours of the rainbow (with the exception of indigo!) and generous use of fondant stars for his cake.

Elizabeth wanted a 2-tier cake as there would be lots of guests as it was a big 1st birthday bash at an indoor playground.

To add the wow factor, I used spaghetti sticks to hold up the big stars.
I avoid using florist wires as it is not food-safe. This is the back view of the cake. 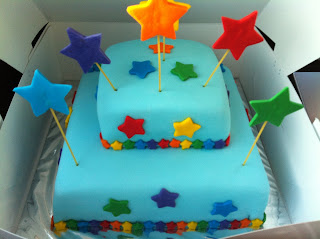 I was really very happy to hear from Elizabeth, post-party,
that little Nathanael liked the cake
and the many stars on it too! The guests liked the cake too!
That's the best compliments ever! ^_^

Heartfelt thanks from the Queen Bee for Mother Kao
for writing about Baking Bees
in her blog post on Nathanael's 1st Birthday.

Posted by Christina at 11:34 PM No comments: